I am currently reading The Narcissism Epidemic: Living in the Age of Entitlement and was struck by the following paragraph: 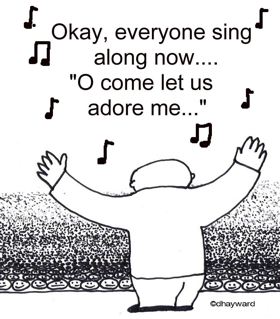 “It’s difficult to say based on hard data whether older adults have shown the same trend toward greater narcissism, as people older than college age have not completed the NPI very often.  Are, say, thirty-somethings today more narcissistic than thirty-somthings 25 years ago?  Our guess is a confident “maybe.”  For one thing, young adulthood looks more like adolescence now than it used to.  Baby Boomers in the 1970s typically settled into employment, married, and had at least one child well before they turned 25.  Today’s average 25 year-old has not achieved any of these milestones; their lives more closely resemble those of adolescents, the time in life when narcissism peaks.  So our best estimate is that adults in their twenties, thirties, and forties are more narcissistic now than they were a few decades ago.  The movement into a less narcissistic adult life may now take longer – or not happen at all, a stark contrast with a few decades ago, when 25 year-olds didn’t live with their parents and 45 year-olds didn’t wear jeans and listen to hip bands.”

If the above is true then it seems plausible that the increase in narcissism personality traits (not to be mistaken with the DSM – IV Narcissism Personality Disorder) among the American population is connected to extended adolescence and systemic abandonment of our youth by the adult culture as a whole.

If this is true then part of the solution lies in reversing and combating the growing narcissism and self-worship.  The best tool we have at our disposal to do that may be the example and life of Jesus, who prayed “Less of me and more of You.”  That sounds like a prayer that we should be praying more often, daily even.

Too often we, youth workers, believe the hype about how awesome we are.  When we lose sight of the fact that we are simply called and empowered by God to answer that calling, we tend to give ourselves more credit than we deserve.  This can unwittingly be reinforced by our students, their parents, and other staff.  To think that narcissism hasn’t crept into the ministry is to live in denial.

Still not buying it.  Here’s a good litmus test:

Will the youth ministry continue to function if you were unable to do it?  Or, would it grind to a halt because it was all dependent on you to make it happen?