I Am A Mother 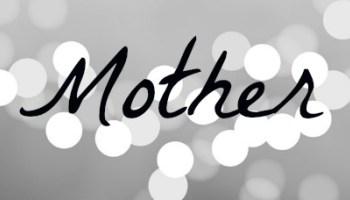 I am a mother. The quality of love that I have for my children is what best helps me understand the fierce love that God has for us. Nothing can shake that determined love. I may not always agree with, or like my children’s choices, but my commitment to them is unbreakable. They are my beloved children…longed for, received into my arms, blessed on their journeys and watched over with prayers and hope. I see them through the filter of love and am bone-deep certain of their worth.

My eldest daughter loves and is married to her wife of almost 3 years and my journey of acceptance and support of their relationship was not without personal pain. Let me be clear, my love for my daughter was never in question! The pain I experienced was being plunged into the “space in between”.

By this, I mean the space between my daughter and the Christian Community that largely doesn’t feel God can bless any marriage other than that of a man and woman.

When my daughter told me about her relationship, my grief was largely due to what I knew was coming. I feared that other Christians (and some family members) would stop seeing my daughter as God’s beloved and start seeing her first through the LGBTQIA filter.  I kept their relationship a secret from all but a few trusted friends. I needed time to come to grips with it myself. Foundational to my fears was the worry that God might see my daughter the way some Christians do…as less than.

Before I faced other people’s opinions, I needed to settle my soul, so I prayed, read, talked and listened to other people, followed discussions and grappled with what I learned. I listened to both sides of the theological spectrum…those who called homosexuality sin, those who said it was not sin if it wasn’t acted on, and those who felt God created a beautifully diverse world and that gender variation were part and parcel of creation and perhaps the “sin” was in not accepting God’s creation.

I talked to an Episcopalian friend of my daughter who surprisingly led me to a Mennonite theologian’s book on sexuality. The book came at the right time and helped me put together all that I had been learning in a way that felt like a key unlocking a door to the wall between my head and heart. Simply, the author explained how our view of scripture has been altered and refreshed throughout the ages because of our unfolding understanding of science. We’ve learned that the world is not flat and that we are not the center of the universe! We’ve learned that women, men, and people of different races carry nearly the same genetic material and that there is no biblical basis for patriarchy or slavery! All are equally valuable to God…and as such, to each other. He said that he believes that God created humans in all their beautiful variations, then called them good. Period. He said that those who claim the LGBTQIA classification were called to the same standards in relationships that heterosexuals were called to. We are all called to relationships that are committed, monogamous, show mutual respect, are non-violent, caring, etc.

I’m a part of the Mennonite Church and our denomination is grappling with where they stand on LGBTQIA issues and what constitutes a faithful interpretation of the bible.

Just writing the word “issues” makes me bristle and tells me how far I have traveled on this journey.  Those who are in the LGBTQIA community may have issues as all humans do, but they are not an issue! They are God’s beloved, created by God, called good by God, and seen through that lens!

I can be patient with other Christians who are still grappling over what they think God says about human sexuality. I have no patience for those who view their fellow sisters and brothers as less than, or even primarily through the sexuality lens rather than the “beloved lens”. I believe this emphasis is sinful and runs counter to God’s intention, harming both the giver and receiver.

I spoke with a couple in Europe who has a gay son. When the mother went to her pastor for support and guidance, he basically told her that her son was not welcome in their church anymore. He said he could still attend although he should no longer serve or use his gifts in the church….and should sit in the back!

Instead of comfort and encouragement, this mother was pushed into that “in between space”….the deep valley between the son she loved and her church community. She took a 3- year detour of grief and isolation that needn’t have happened. Her son was left without a community in which he had been loved and nurtured just a short time before. The parents have since found a new community that is welcoming to all and they bear their scars well. The last I’ve heard, their son still has not found a church community.

My daughter is not in a Christian community and that is hard for me to see. She and her wife attended a small Mennonite church for a time and felt at home at first, but soon came to see that the hospitality was half-hearted at best. They have found their community with other women who play Derby and though I am glad for the friends they have there, I feel it is a pale substitute for what Christian community could and should be. It should be a diverse community that sees each other through the lens of God’s beloved-ness AND sees each other through the hope of what God is calling us to become.

If I could say one thing to the Christian community I think I would say that you need to offer God’s love to ALL, with no strings attached. Telling yourself that you love the “sinner” but not the “sin”, is the same thing as telling that young man that he is welcome at church but needs to sit in the back. God’s hospitality is wholehearted, not conditional. Half-hearted hospitality is irrelevant.

If I could say one thing to the LGBTQIA community, I think I would say that I have come to see you as God does….beloved, created in God’s image and part of his amazing creation and I yearn for the day when the chasm between the two communities disappears.

Mary Kennell lives on a family farm in Central Illinois and is married to Roger. They are proud parents of four adult children. Mary was formerly on the pastoral team at Roanoke Mennonite Church where she and Roger still attend.