Frank came in to see me today. I am not sure I will ever forget my meeting with him. In one of my first grad school classes in social work, Professor Davis asked us to think about our own limitations, she told us that everyone has a group of people that they just can’t work with; and for me instantly I knew it was pedophiles. I just did not think I could work with anyone who hurt children in that way. I had seen the wreckage of those actions too many times. I believe in second chances, but in the most honest corners of my mind, I found the thought of working with them reprehensible. Our professor explained that it was normal to have these feelings, but to try to work with these clients would be a disservice to them and a disservice to social work, so we had to learn to pass them along to someone else.

And then in walks Frank. Frank explained to me immediately that he needed help with housing. He was in a motel, but he could only afford one more night. So, I began the standard line of intake. Are you working?

“No mam,” he replied honestly, “I was just released from prison last week, I was in prison for 37 years, and I have no one left out here. It is not going to be easy for me to find work, I have some particular obstacles.”  And then the story came, as it always does. I was not prepared, and I believe that was the best way for it to happen. He was sentenced to 40 years for three counts of sexual assault and they were all three minor children. My stomach immediately churned. Instead of going any further I knew I needed to find a way to humanize Frank.  I asked about the scarf he was wearing, it was truly a work of art. 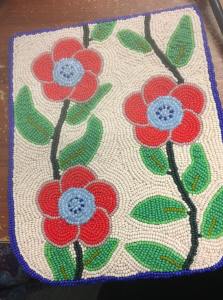 “I made this” he explained. “In prison the hours are long, and so I taught myself how to do this, and I also learned beadwork, let me show you. He pulled out the most beautiful fabric pieces with intricate beaded patterns. How could someone who caused so much pain to innocent children, create something so beautiful?

He just kept telling me his story; I could tell he was nervous. Prison for 37 years, and all his family dead, the prison gave him a small amount of money for about a week of a motel. He knew it was going to be an uphill climb; no one wants a sex offender in their shelters. Up until last week he had never held a cell phone or typed on a computer. He had no idea what an automated phone system was. He said he can’t navigate all this technology. He spent hours yesterday looking for a payphone. He is scared to sleep at night. It is too quiet in the motel. He does not know how to function without the guards being around and the schedule of the prison. He knows he is institutionalized. He said he spent the night last night throwing up out of fear. He said it feels like he is falling.

His honesty stunned me. I felt powerless in my job as I so often do. And again I felt compelled to be equally as honest. “There is no shelter that will take a registered sex offender around here. It will be extremely hard for you to find an employer to take you. The best I can do is to make some phone calls with you.” And so we spent an hour on the phone.  We called every agency we could imagine. Not one had any options for a newly released sex offender. We found a small glimmer of hope for him two cities over, and the best I could do was to give him a gas card so his friend could drive him there. I asked to see the beadwork again, and I offered to buy it from him. He was overwhelmed with gratitude.

I wanted to tell him that I was not doing it for him.  That I needed to own it and to look at it and to search my heart and my conscience; that I needed to try to understand how a human being can be capable of inflicting so much pain and suffering and also create something so delicate and intricate and beautiful. I needed to think about the pain that created that side of him that is a monster in my eyes, and I also needed to think about the God that made even him in His own image and likeness. I needed to find a place in my heart to love even him and to believe that he deserved to rebuild his life when I am certain his victims still carry his wounds with him. But instead, I let him think I was doing it for him. And maybe I was. I am still not sure. I told him I would pray for him, and I know that I will, but I also will pray for his victims whom I know were notified of his release.

My job is to help whosoever comes through our doors, and Frank is whosoever. If I believe that every single person is worthy of redemption and a second chance, can I really believe that there are any exceptions to that? Can I love the person who Frank was created to be, and the person that he became? Can I pray for him to have safety and a productive life? Can I one day look at the beautiful art he created and hope Frank is somewhere happy and well?  I pray I will. I pray that my heart will be broken again and allow room for even Frank. I can honestly say I did all I could for Frank, and that he had no idea the war that was raging inside of me.

Karen is a mother of three amazing adult children. She works for a non-profit organization that serves some of the most marginalized and vulnerable individuals. She is passionate about people and believes every person has a story just waiting to be told.